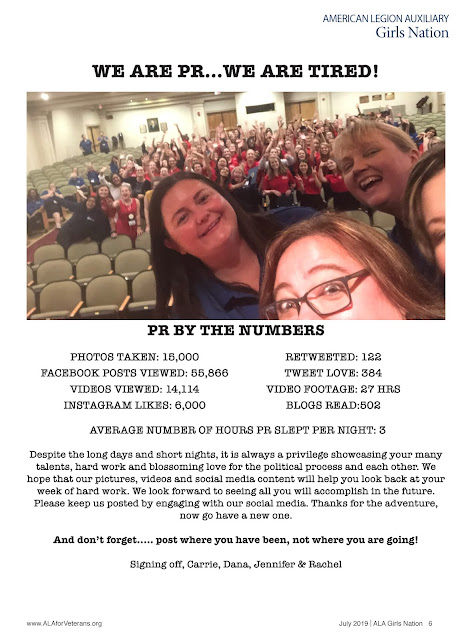 Posted by American Legion Auxiliary Girls Nation at 7:00 AM 1 comment:

A Century of Progress

A Century of Progress

2019-2020 is a special year for a lot of reasons. It is the 100-year anniversary of the American Legion Auxiliary, the organization that sponsors ALA Girls State and ALA Girls Nation. Though many things have changed over the past century, the Auxiliary’s dedication to veterans, military, and their families both at home and abroad has never wavered.  We are committed to service, and through the years we have become the largest women’s patriotic service organization in the world.

But 1919 was more than just the year that the ALA was founded - it was the year that the 19th Amendment to the Constitution was passed by both chambers of Congress and sent to the states for ratification.  For those of you who need a brush-up on your government knowledge, fortunately you have an ALA Government staff who is happy to assist you! Gather round and let me tell you the tale of how the 19th amendment was ratified.

Hopefully by now, you know that the 19th amendment guarantees all American women the right to vote.  Securing this basic right took decades of struggle, protest, lectures, lobbying, marches, and civil disobedience.  The early suffragists who were willing to make great sacrifices for future generations of women, gave us one of the greatest possible gifts.  At ALA Girls Nation, we celebrate those women (and men!) who fought for this noble goal with such a purpose and without wavering.  The struggle was never easy but these individuals were unified in their drive to change their condition and began to secure equal rights for women.  They knew what they wanted to achieve, and they understood the importance of their work.

The United States House of Representatives passed the 19th amendment on May 21, 1919, and the US Senate followed suit on June 4, 1919.  Though it would take a year for the amendment to be ratified by the required three-fourths of all state legislatures, in 1919 women were the closest they had ever been to securing their right to vote nationwide.  In August of 1920, thirty-five states had voted to pass the amendment and eight had voted to reject it. (Remember, in 1920, there were only 48 states - so there were only five possible opportunities left for states that could ratify this amendment!) Suffragists viewed the state of Tennessee as their best chance for support and it was there that one man (and his mother) changed history.

That summer, the Tennessee State Senate easily passed a resolution supporting the 19th amendment.  However, the Tennessee State House seemed stuck in a stalemate.  The motion to table the amendment was defeated (in a 48-48 tie), and the measure was brought to a vote.  It was on August 18th, 1920, that a young man by the name of Harry T. Burn, a 24-year old wearing a red rose to signify his opposition to women’s suffrage, changed his mind.  In one of my favorite stories of this era, Harry Burn’s mind was changed when received a seven-page letter from his mother.  She had written him a note encouraging him to support the 19th amendment and said that he should, “be a good boy and help Mrs. Catt” (Carrie Chapman Catt - a famous suffragist of the day).

When casting his vote, his colleagues expected him to say “Nay,” but instead Burn said “Aye.”  That single syllable delivered the right to vote to all American women, ending over 70 years of tireless struggle by suffragists.  Allegedly, when he voted in favor of the bill, the chamber erupted.  Burn was chased around the room and climbed out of a third floor window to escape the mob. Although I don’t know much more about what happened to Burn after that - but the Secretary of State, Bainbridge Colby, certified the ratification of the 19th Amendment on August 26, 1920, forever changing the American electorate.

Although this was a landmark victory, we should recognize that it did not open the polls to all women.  Millions of women remained unable to vote for reasons other than sex - but this stride helped bring us one step closer to our nation’s lofty ideal that all men and WOMEN are created equal!

A Reflection from the ALA Senior Counselors

A Reflection from  the American Legion Auxiliary Senior Counselors


ALA Girls Nation is an opportunity for young women to discover who they are, what they can be and how to work within a team to get things done. It’s also an opportunity for ALA members to do the same while serving on the ALA Girls Nation Committee! Our team of Senior counselors is as diverse as our ALA Girls Nation Senators. Our talents include line dancing, motor cycling, Pokémon gaming, hugging, crafting, cooking, shopping and making the best-looking sundaes.  All these skills come in handy as we go above and beyond for the ALA and ALA Girls Nation.
With 150+ years of membership between us, there are so many reasons why we love being ALA members.
·      Volunteering with the VA
·      The friendships and sisterhood
·      The mission, programs and giving back through working them
·      Giving back to those that gave for our freedoms
·      Riding with the American Legion Riders
·      Raising money to support programs and scholarships
We thank our fathers, brothers, husbands, and grandfathers that served in all branches of the service and sacrificed so we can be eligible to serve through the American Legion Auxiliary.
It’s because of these traits passed on from our loved ones who served, we can support, encourage and teach the senators in our community through our words and actions.  We want to share some of those moments that made our hearts warm and our faces hurt from smiling!
Key moments from the 73rdALA Girls Nation
·      Seeing senators grow throughout the week
·      Watching them get involved and running for offices
·      Party rallies and creative cheers
·      Hearing the senators defend and debate their bills
·      The reflections from the memorial visits
·      Excitement from meeting with their elected officials
·      When they brought enthusiasm and joy through singing and dancing at the Twilight Tattoo
·      When others not with the ALA Girls Nation program commented on how respectful and well behaved the senators were.
Thank you, American Legion Auxiliary members for the time, talents and treasure (and sleep) you gave up to make the 73rdALA Girls Nation session a memorable time!